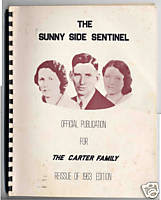 I can’t remember the exact date, but it was after one of those Nashville Fan Fairs that I used to attend each year in early summer. My cohorts in product development for Time Warner were with me. I know that much.

We were heading north of Nashville to find this barbq truck we’d heard about.We found the thing, actually, and there is a great picture of the three of us–Joe, Charlie, and me–with the sauce dribbling down our swag T-shirts (on mine, it looked like Merle had blood dripping down his face).

Anyway, after the food break, we decided to locate this guy Freeman Kitchens, who had been contacting Charlie for awhile to see if our repackaged oldies biz would release a Carter Family set for TV direct-response sales.

Of course, the sound of ancient Carter Family recordings on a television commercial would have put us out of business -- not to mention the fact that there wasn’t any real footage. I mean, A.P. wandering the Virginia hills with a handheld camera behind him, wobbling as his depressed thoughts meandered, would have been great, but…..(that’s the real problem with the media overload: all the good stuff was long before YouHooLookAtMeTube even existed).

And so, we find Mr. Freeman, who turns out to be a great host, and he’s surrounded by reel-to-reel and cassette tapes of the Carter Family with tons of memorabilia and stuff all over the place. He sure had focus.

He was a really kind and thoughtful gentleman, and we stayed for an hour or so, but didn’t really promise him anything. Nevertheless, we came to believe in the Carter Family even more.

But not enough to put them on TV, mind you.

Freeman’s documentation was undoubtedly central to all of the scholarship that has gone on over the years in creating the CDs, books, etc. for one of America’s greatest wonders of musical outpourings. 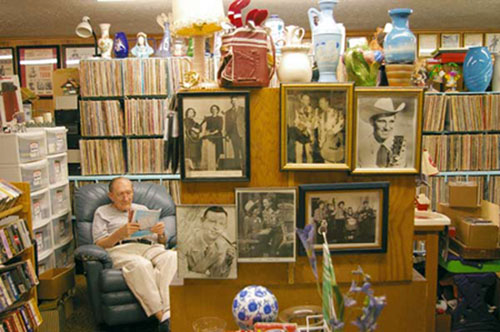 Here's the great man himself in a much more organized environment than when we met him—as if he had come to rest in the heaven of his accumulated desires. Of course, you can see A.P. peeking over his shoulder.