HUMS OF THE EVER-LOVIN' BUNKY AND JAKE 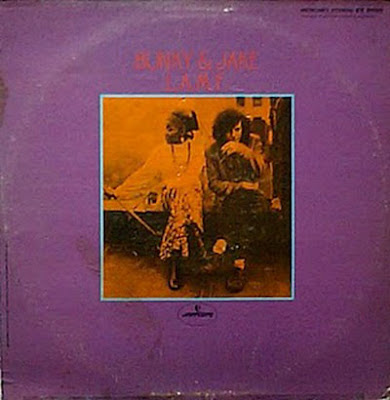 Andrea "Bunky" Skinner, an attractive black woman from Brooklyn, and Allan "Jake" Jacobs, an aspiring white male bohemian, met between brush strokes at New York's School of Visual Arts in 1962. In high school, they had both sung on street corners with a cappella groups--Bunky with the Mello-Larks, Jake with Claude and the Emeralds.

Eventually they began to be influenced by the folk music coming from the coffeehouses of Greenwich Village. Bunky and Jake, who had first met to rap about the old vocal groups they adored, put an act together and played the folk clubs, singing of being hip in New York City. The duo even appeared at The Bitter End on a bill with Joni Mitchell.

In 1965, Jacobs had been a member of the folk-rock band, The Magicians, which gained a following in New York and released some interesting folk-garage singles, and even had served as the house band at the Night Owl Cafe after the Lovin' Spoonful left the gig.

When the Magicians disbanded in 1967, Jacobs and Skinner signed with Mercury Records as a simple folk duo, releasing their 1968 debut album, Bunky & Jake. It was followed a year later by their masterpiece, L.A.M.F, also on Mercury.

Like a good-natured jam, the duo's second album, L.A.M.F., is an eclectic blend of musical influences, a record that's funkier and more rooted in traditional rock than the average folk record of the period. Their first album for Mercury, Bunky and Jake, though pleasant enough, was too pop, marred by corny string arrangements.

In contrast, L.A.M.F. sounds like music made on a sunny rooftop among neighborhood friends.  Bunky and Jake are backed by a competent bassist and drummer, and their sound is filled out by various instruments:  organ, vibes, clarinet, piano, conga, and sighs.  The overall feel is of being amiably zonked.

In an interview in Hit Parader, the rock zine of its day, Jake once labeled the tunes on L.A.M.F. as "songs of lament," and most of the tunes do refer to other times, other places, other artists.

"Uncle Henry's Basement" could only have been made after the release of the great Hums of the Lovin' Spoonful (John Sebastian is clearly one of Jake's heroes); "Girl from France" reworks the harmonies of a the 1954 hit, "The Wind," by the a cappella group, Nolan Strong and the Diablos; and, the transcendent "I Was a Champion" is the result of an infatuation with a James Cleveland album.

But Bunky and Jake don't just stop at referencing their musical heroes. What keeps L.A.M.F. really hopping are the lively renditions of Reverend Gary Davis' "I Am the Light," the Olympics' "Big Boy Pete," and Chuck Berry's "You Two" and "Jaguar and Thunderbird." It's no coincidence that on "Cadillac Bleu" Bunky's voice sounds remarkably like Dionne Warwick's or that Jake's guitar playing often echoes Django Reinhardt's.

But despite the assorted references -- or probably because of them -- this album is a smooth and mellow get-together, a reminder of what the Village scene once could offer.

Jake continued to work in the hip-folkie tradition with a band called Jake and the Family Jewels.  They released two LPs on Polydor, one self-titled plus some kind of thing called The Big Moose Calls His Baby Sweet Lorraine.   For two good reasons, these albums were mediocre at best:  Bunky was not on them, and Jake was standing in that ever-growing and tiresome next-Dylan line.
Posted by Robert Hull at 6:38 PM