THOSE MINDBENDING KIDS OF YORE 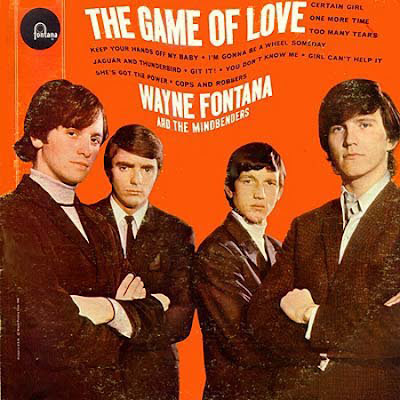 A Manchester combo originally called the Jets, Wayne Fontana and the Mindbenders performed with a trebly guitar, shirll falsettos, and a breakneck purposelessness. In 1965, they released, as if by chance, one of the great party albums of the British Beat era:  The Game of Love (Fontana MGF 27542).

The British Invasion era -- which gave us so much with the Beatles, and somehow gave us so little -- was mostly about English whippersnappers discovering and usurping American R&B. And the Mindbenders set out to prove that they too knew the traditions.

Traveling the length of this album, a short sweet distance, it's as if you have passed through the entire history of rock 'n' roll up to 1965.

Like the Animals and the Pretty Things, the Mindbenders conveyed their roots with integrity -- and with an enthusiasm that suggests they knew their moment would be brief. Without stopping for breath, the cover Bo Diddley's "Cops and Robbers," Fats Domino's "I'm Gonna Be a Wheel Someday," Ernie K-Doe's "A Certain Girl," and Chuck Berry's "Jaguar and the Thunderbird." Their version of "The Girl Can't Help It" is like a studio outtake caught in the middle of things -- the band plays too fast, stumbling, trying to keep pace with Little Richard's spirit.

Half the time these guys even sound like a girl group with their haunting, wavering falsettos never cracking, going way beyond what seems natural for male voices. There is a handclapping version of Little Eva's "Keep Your Hands Off My Baby, an Ellie Greenwich tribute ("She's Got the Power"), a piercing "Too Many Tears," and a song done in the style of the Motown ladies ("You Don't Know Me"), all played with a doo-wah innocence.  The one original on the album "One More Time," could be a recording by Rosie and the Originals.

"The Game of Love," the hit the album was built around, depended on this girl-group effervescence. (A year later, with "A Groovy Kind of Love," this style collapsed into a nauseating croon.) The voice states:  "The purpose of a man is to love a woman, and the purpose of a woman is to love a man," then a perfect tinny guitar fills the space, a bass competes with a falsetto, and a sexual squeal tears through the Garden of Eden. It sounds like the band is in drag.

Like many great albums, this one seems tossed together -- and it probably was, released quickly in the wake of the Beatles' triumph.

In fact, the Mindbenders themselves were thrown together in May, 1963, when two of the members of the Jets didn't show up for an audition for Fontana records.

This particular Mindbenders' recorded work has that kind of lightweight charm, the music of kids learning the ropes with determination and not caring if they lose, thrown together for one brief moment of enlightenment. The British Beat era was full of such young bands, but as this album shows, the Minderbenders were one of the very best. They were truly the "yeah, yeah, yeah"'s the Beatles left behind.
Posted by Robert Hull at 8:13 AM