THE DELIGHTS OF DR. DEMENTO 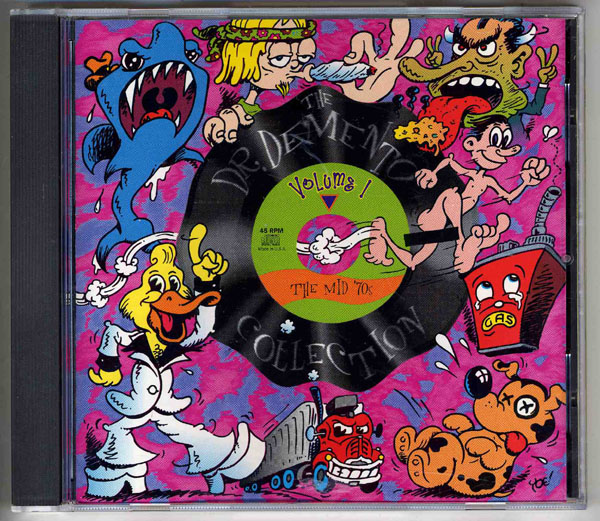 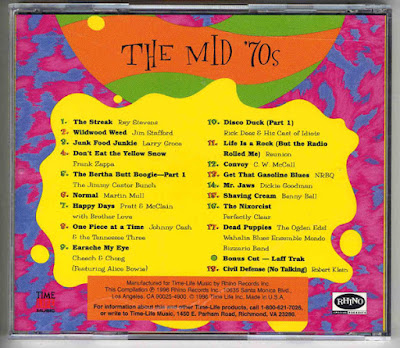 Spikes Jones, Allen Sherman, Stan Freberg, Yogi Yorgesson - these are just a few of the wonderful gems that have been unearthed over the years by the crazy Dr. Demento.

Dr. Demento's radio show (online and off) has been a favorite of mine for decades, and it is that show alone, I think, which has kindled such a devoted interest in novelty and comedy records among growing fans over the decades.

Middle-school and high school kids bathe in this stuff.

Demento's fans plague him with requests - petitions, phone calls, smoke signals, telegrammed threats - pushing their fave raves be it Rusty Warren's "Knockers Up!" or Jim Backus' "Delicious."  The market for this stuff are those trapped in a state of arrested development, and usually that means teenagers.

Demento has compiled many collections of this dumb music, and each one is an event that heralds a new level of tastelessness.  His packaged nonsense consistently serves as a wunnerful wunnerful introduction to what seems like a lost world of noise, gibberish, and loud burps. Lots and lots of novelty recordings can be discovered regularly on his forever crazy show.

The selection of material on these collections has usually been determined by how successful it played on Demento's radio shows. (Napoleon XIV and R. Crumb always seem to be on them.)

For example, there's Possum's "The Cockroach That Ate Cincinnati" (the answer record to "The Eggplant That Ate Chicago," which in and of itself is sufficiently demented - but in the world of novelty records there is always that step beyond) that combines belches, groans, and screams to create the perfect horror-snot performance. Not even grade-Z monster flicks were ever this appalling!

Then there's Ben Gay and the Silly Savages' "Ballad of Ben Gay," which belongs to the usual poke-fun-at-gays ilk, a genre so jam-packed with contenders that its equivalent can only be found in Helen Keller jokes. The Demento dimension does not always embrace being PC.

Dumb discs of the demented variety are constantly being rediscovered, and a record can become "demented" even though its original intent was quite serious. The frustration here is that you have to listen to Dr. Demento's show in order to keep up. (He's a great MC...kinda like what Ghoulardi was for horror movies on television.)

When bordom sets in, nothing but nothing beats a crazy record. Recorded dementia can cure zits, clear sinus passages, relieve back pain, and even stop constipation.  Hey, give it a chance!

Check out The Demented Music Database here.
Posted by Robert Hull at 8:10 AM