ALL HAIL THE CREEPING TERROR KNOWN AS FRANK ZAPPA 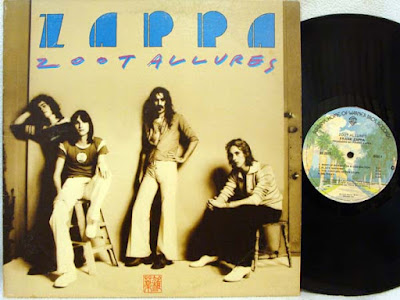 Frank Zappa is the creeping terror!

X the Unknown, That's Mr. Z., who set himself up ages ago as the spokesman for the dawn of social correction (listen, Barry McGuire was just clowning around, and Sgt. Barry Sadler just hated gooks so they don't count) and told a whole generation of innocent babes (not yet exposed to warfare like Starsky and Hutch but still being fed on Star Trek and The Joe Pyne Show) to TURN OFF THEIR TV SETS.

That's really what the agenda of Freak Out was all about, a justification for Zappa's own paranoia, suggesting that the Brain Police were actually seeping out of the tube.

Just like with Richard Nixon, though, it's time to stop kicking Frankie Zzzzzz around. It's getting boring. His head is in another direction altogether since those early days of hippie propaganda.

The cynicism is still apparent, but the music is no more a weak excuse for labored classical rips and free jazz atonality soup. In retrospect, there's nothing more hilarious than the sarcasm flaunted by the Mothers, and essentially Zappa has maintained that act all along.

With this in mind, Zoot Allures is a riot (well, ya know, in a perverted sense, like watching Lawrence Welk and thinking it's cute). "The Torture Never Stops" has gotta be the bumper sticker statement on Zappa's Mercedes (Honk for Zappa!) cause it has certainly been the theme of his last few records. On this doodle, the anguished moans and gasps of a woman being disassembled seems to be the ribtickler. Anyway, the mood of a concentration camp does come across (similar to "The Chrome Plated Megaphone of Destiny": hoo boy).

"Friendly Little Fingers" is just Zappa's witty way of saying that he does a guitar solo with himself (song ends with a chorus of "Bringing in the Sheaves"). Followed by "Wonderful Wino" which is the tale of an alkie who eats the labels off wine bottles and craps on old ladies' lawns (satire? WHAT DEPTH!).

But it's on "Disco Box" where Zappa really lets loose his punches ("Leave his hair alone, but you can kiss his comb"). A novelty song like "Disco Duck" could never fathom the vacuum of a trendy dance scene because it uses the disco formula to its own advantage. In contrast, Zappa remains consistently offensive by fronting his attack with heavy-metal slices. Rarely has Zappa bitten his enemy so viciously.  For those of you who despise the disko dorks, it's pure catharsis.

Suddenly the Disco Scene is transformed into a Disco Wake, composed of shuffling lacquered bodies with only a brainwashing pulse to keep them in motion. For Zappa, disco represents a masturbational fixation (the mindless bumps celebrating only the movements of pounding yr poodle). "Disco Boy, no one understands, but thank the Lord you still got hands/to do that jerking off that'll blot out your disco sorrow/it's disco love tonight." Ain't that sweet?

Zoot Allures is really only successful as a comedy album. Zappa's music is still about as exciting as a wet sponge, but he has found a new scapegoat. Television no longer seems to be the target of Zappa's satirical whip as much as the zombie wave of discophiliacs. In the final analysis, according to his Holiness the Zappa, who, indeed, are the Brain Police? Barry White! Salsoul Orchestra! K.C. and the Sunshine Band! Silver Convention! Ooga Booga and his Average Honkie Band and the entire silly bunch.

Thanks for the great insight, Frankie, baby!
Posted by Robert Hull at 7:09 AM