My interest in collecting records began with Heckle and Jeckle, the talking magpies. I loved both their 40s and 50s cartoons as well as the Terrytoons TV show. As with any kids' cartoon show, there were products.

On a small turntable the size of today's typical laptop, I played my first record -- music from the Heckle and Jeckle show. The phonograph record came with a picture sleeve (it was an EP rather than a 45). In the center of the record, there were the images of Heckle and Jeckle chasing something (or each other).

The attraction of this record was that it came with a 4-sided mirror contraption that you put in the spindle after you'd set the record in place.  And so, when the record played, the cartoon magpies chased each others' reflections in the mirror. There was music--and there was motion.

At the age of four, living in a small town in Texas, this was my most prized possession. In fact, the mirrored images somewhat replaced the televised images for awhile.

But this was enough.  I was not yet a vinyl addict. I was content with this one thing.

If I can pinpoint the moment in time when I feel like "the rush" kicked in, it was probably when I was living in Marlow, Oklahoma, at the age of six. It was here that I purchased from a grocery store my first grown-up record--Elvis Presley's Flaming Star EP. The record contained only two songs from the Don Siegel film of the same name in which Elvis played a half-breed named Pacer Burton. 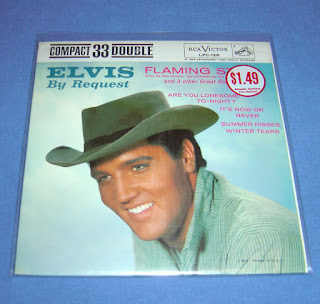 I hadn't seen the movie, nor did I really care for Elvis that much. He was ubiquitous, but frankly, I preferred Superman, Tom Terrific, or Jerry Lewis. I think what I liked about the EP, though, was the image of Elvis as a Native American.

Because of the Native American culture that surrounded me in Oklahoma, Elvis' movie image comforted me. It was as if he were in the backyard all the time.

I don't remember listening to the Elvis EP much. As with Heckle and Jeckle, I think the image that came with the record overwhelmed the sound contained in the grooves. Besides, it was the early '60s, and there was plenty of good stuff on the radio, a constant stream of country, pop, rock 'n' roll, novelties, and wild jabbering. That was enough at the time.

But not long after my Elvis as half-breed fantasy, I discovered the LP, the record album, the long player, the old 33-and-a-third.

And that was all she wrote.
Posted by Robert Hull at 6:22 PM