IN PRAISE OF THE PIANO PRINCE OF NEW ORLEANS 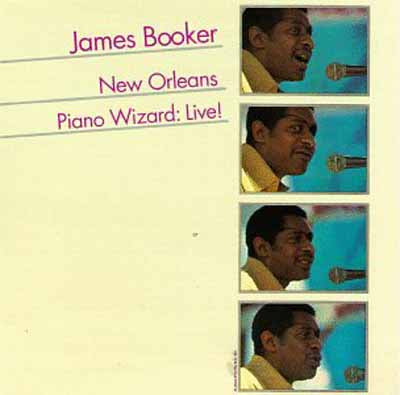 "We want more!" begged the Swiss at the Boogie Woogie and Ragtime Piano Contest of November 27, 1977. And indeed, they got more – a veritable bargain of interpretive dexterity as James Carroll Booker III, the self-dubbed "Piano Prince of New Orleans," let what seemed like 88 fingers fly across the 88's.

New Orleans Piano Wizard: Live! is an impromptu delight. It will (and does) stand with the very best of the rhythm and blues LPs from the Mardi Gras homeland – Chris Kenner's Land of 1,000 Dances, Ernie K-Does's Mother-In-Law, Aaron Neville's Tell It Like It Is and Like It 'Tis, Professor Longhair's Crawfish Fiesta and the numerous collections of Fats Domino and Huey Smith.

The truth is that Booker had, at one time or another, studied under, tutored, performed or recorded with most of New Orlean's finest musicians; they, in turn, still confer upon this Merlin of the Keys the usual titles – "legendary," "genius," "prodigy."

But while Booker was well-known among his colleagues, he is all but forgotten beyond the narrow and dusty corridors of rock history. Up to this point, his chief claim to fame was the fact that he introduced the organ to Bourbon Street, which resulted in a minor national hit in 1960, a rather average organ instrumental called ‘Gonzo’.

But they ate him up in Europe, as evidenced by this recorded performance. Overseas, Booker had had at least three LPs available (all live recordings) long before the release of this Rounder album (itself a reissue of one of the imports).

After hearing Booker hang his head 'on "Come Rain Or Come Shine," or sharing with him the tragedy of loneliness on two Percy Mayfield songs, you recognize that he doesn't deserve this ill fate of obscurity – not just because of the sensitive touch of his omnipresent hands, but more because of a soul that can transform any material, however bland (an amazing example – Frank and Nancy Sinatra's "Something Stupid") into a sheer ecstasy of eccentric entanglement.

As he walks through the mist on "Black Night" or bounces into a brothel on Joe Tex's "Come In My House," Booker brings with him the atmosphere of a magical place and the consciousness of an era that perhaps he feels, has not vanished.

This desire – this carnival of dreams– does not get lost in translation. The Swiss audience responds deeply to Booker's sense of loss and renewal -- they, in fact, go crazy throughout the entire recording.

What the audience hears is indeed absolute wizardry: a strange man, wearing a black eyepatch with a gold star imprinted on it, far removed from the city where he was classically trained, having long ago abandoned that formal background for the love of the boogie-woogie beat and now pouring out that love in a time and place alien to his magical homeland.

Such a magnificent exchange between audience and performer is certainly rare, and such a perfect performance even rarer.

Pour the bourbon and sip slowly.
Posted by Robert Hull at 3:31 PM