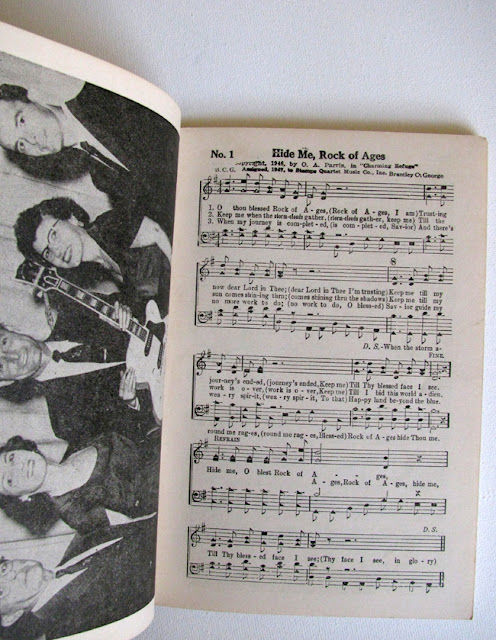 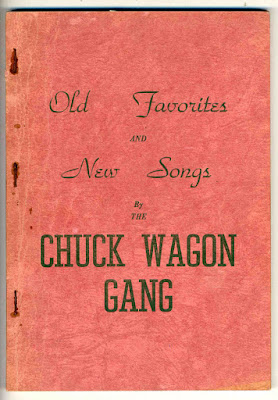 I first heard their recordings on Rev. Mull's Singing Convention on his flagship station WJBZ in Knoxville.  On this praise station, Rev. Mull and his wife hosted the show and taught Bible prophecy.

My father was a Presbyterian minister in Knoxville at the time, but this program had music that was somewhat rawer--more heartfelt, it seemed--than what I was hearing at my father's church.

The Chuck Wagon Gang sang everything, every sacred song you could name. Formed in 1936 by founding member D.P. Carter with his son Jim and daughters Rose and Anna, the Chuck Wagon Gang eventually signed with Columbia Records and remained with the label for over 40 years.

At one time, the Chuck Wagon Gang were Columbia's NUMBER ONE selling group. In my opinion, they are the greatest Southern Gospel musical group ever.

Growing up in Tennessee in the '50s and '60s, you could hear the Chuck Wagon Gang on the radio consistently every Sunday morning.  It just wasn't Sunday without 'em.

The above image shows one of their sacred songbooks, a true treasure from the folks downhome, which is always the place to be---if you can ever get there.

The Chuck Wagon Gang Sings "Echoes from the Burning Bush"

The Chuck Wagon Gang were the best when it came to singing the old hymns. They were the other Carter Family. Based out of Fort Worth, Texas, you see them heresinging one of their most requested songs. Along with sisters Anna Gordon and Rose Karnes, is their brother Jim Carter singing bass. Also is Anna's husband Howard Gordon on guitar with that unmistakeable Chuck Wagon Gang Sound and tenor singer Pat McKeehan. The man asking the questions and requesting the song is Wally Fowler.
Posted by Robert Hull at 1:46 PM