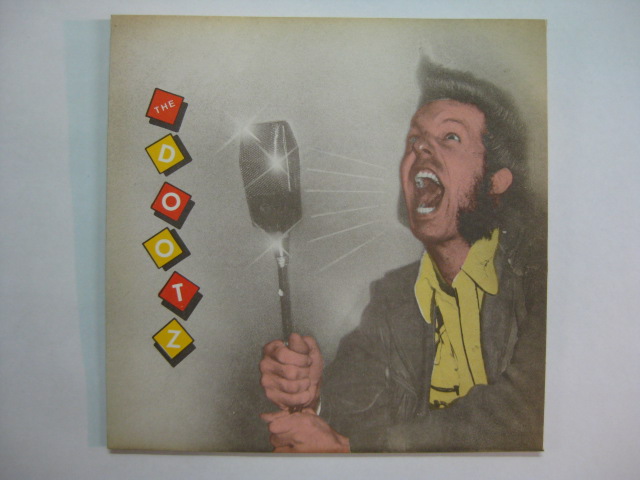 If you can imagine it, there once existed a bizarre cross between American punk's Legendary Stardust Cowboy, the author of the histrionic "Paralyzed," and rockabilly's the Phantom, who won our hearts with the mysterious "Love Me."

His name was the Dootz, and he singlehandedly created a stylistic blend that can only be described as mutant American primitivism. This radical sound, born in the early '80s, was downright psychotic to the point of being transcendental.

It was the creation of one David Frey Johns, who had spent most of his life singing to records in his room and wailing in friends' showers, hoping one day to be heard in a social context. As a child David Johns was called "Duke" by his father, a nickname that eventually evolved into "Dootz."

"My dad and I used to sing together when we went to church," the Dootz once told me, "but we had our own version of 'Onward Christian Soldiers.' Everybody else was singing it the right way."

Johns' earliest musical influences were typical--Elvis, the Beatles, Buddy Holly--but he was especially devoted to James Brown and Jackie Wilson, two performers who possessed an intense emotional style both on record and in performance. At times, the future Dootz even considered himself more of a soul singer because he could reach deep down and pour himself inside out with feelings from real-life experience.

In the '80s, the Dootz began making tapes at the Sonny Huckle Studio in Falls Church, Virginia (in actuality, a mildewed basement, stocked with a jukebox and cases of cheap beer, and far more degenerate and danker and grungier than the French villa where Exile on Main Street was recorded).  Those underground recordings (not available online, but you can find them on broken cassettes) still bear witness to the Dootz's commitment to the tradition of getting gone. Included are uncontrolled, battered versions of Bill Parsons' "The All American Boy," Bobby "Boris" Pickett's "Monster Mash," the Troggs' "Wild Thing," Doctor Ross's "The Boogie Disease," and the Standells' "Dirty Water."  Further, as if defying the ever-impending Apocalypse, the Dootz performs the craziest cover of "Train Kept A-Rollin'" ever conceived by any mortal.

Two songs were eventually culled from these landmark sessions and released as a single on the Sky label (named in reference to the Sun label, not Sky Saxon, bless his soul)--"A.C.N.E. (I've Got Acne)" and "I'm the Dootz." Both are original songs recorded in one take and composed on the spot.  On both songs, the Dootz shouts and howls from the pit of his soul, revealing a naked hysteria and an unrehearsed moment of being.

"I'm the Dootz" is a reworking of Bo Diddley's "I'm a Man" with a sense of spontaneity rarely heard on recordings, now or then. "A.C.N.E" is an astonishing garage-novelty performance, so powerful that it qualifies as the "Louie, Louie" of the '80s. The Dootz told me back then that he hoped "A.C.N.E." would become a million-seller--but he would gladly settle for a regional hit.

Most rock 'n' roll singers don't use their whole body as effectively as the Dootz once did. For him, music meant a kind of spastic catharsis. His conviction was real, his emotions genuine. Having spent most of his employed life back then working in a gas station or delivering auto parts, the Dootz's personal goals was to shape a rock 'n' roll sound (and I quote)--"a million times weirder than anything anybody's ever seen, done, heard or performed."

The Dootz's music was primitivism of the highest, or rather, lowest order. To this day, those-in-the-know eagerly await his version of "Mystery Train."
Posted by Robert Hull at 6:29 PM