THE RAGGED TALE OF THE PLASTIC PEOPLE OF THE UNIVERSE 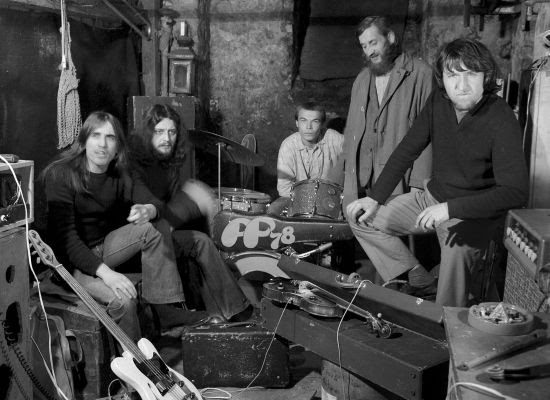 I have been shopping for the recorded works of these raggedy bunch of hipsters.

I already have this band's box set which has 8 CDS, including the classic Egon Bondy, and is actually carved out of a giant wood block. Some poor guy in Eastern Europe back in the day had to spend his evenings carving the thing--a humonguous totem is what it is!--with a hammer & knife & chisel so that the beast could be shipped overseas to the desperate and panting collectors who had been sold the whole bill of goods that this group was a commie version of the Mothers or the Velvets.

This beast of a box set sits on my record shelf, and it will not sell!
(See link above and then go for it!)

I love this band. I can't help it. They are one of my all-time favorite obsessions. Reason being:  If you're an obsessive dupe like me, who loves spending hours trying to find stuff that he never gets around to experiencing, then this band is the perfect find.

A special thnx must go out to Mr. Christgau for exposing the Plastic Purple People Eaters to the public way back in the late '70s. Ever since then, God himself couldn't knock these guys off their rock-culture pedestal.

And so, I've been shopping. Going on the Internet to find the Plastic Pulnoc whatsits that I don't have, and maybe one day will listen to.

Frankly, I haven't heard an entire CD by them ever, but I plan to when I retire. (Good stuff to listen to when you're a codger:  commie rock from when being a commie was cool! Music and memories!!)

[Still can't find Live at P.S. 122, so if you got it, send it on! Which is the whole reason I wrote this stupid blog entry, anyway, to get your attention to do just that.]

Meanwhile, there's an entire ragged & jagged history of these rock giants, which I don't have the patience to unravel. And so, I went to Mr. Christgau's website, which is my favorite site in Internet heaven because CGod writes about something he thinks is good and then you go to Spotify and you can hear real quick that it ain't:  full proof indeed that rock criticism is dead when anybody can instantly ascertain the truth.

But lo and behold, threading below his steady stream of usual raves, there were tons of comments about his, well, usual raves. Including many exchanges about good-ole you-know-who because they're sacred, right?
So plz read below, and save me the trouble of explaining the history, which none of us has time for anymore anyway.

BUT FIRST:  I don't remember the year (it was in the 90s, which we will all one day know as the last halfway decent decade), but I once did experience the Plastic Pulnoc People at a crazy performance in Washington D.C. (I promise to report on this event in the near future.) I went with my old pal Charlie McCardell, so he will remember the details, and I'll get him to send me an email. But here's the point:  It was the best and finest damn rock concert I have ever been to in my life!!! (And I've been to some doozies.)

That fact, in and of itself, is reason alone to pay attention to the opinions of Mr. Christgau, the man who almost singlehandedly brought attention to these incredible Plastic oddballs.

A special thanks,too, to Mr. Seth T. for setting us all straight re the following historical matters. Send me your last name, Seth, and I'll write a blog about you!

Initial mention of the P.S. 122 Pulnoc tape was in Xgau's essay for the 1989 Voice Pazz & Jop Poll, where the unreleased tape was #1 on the Dean's List accompanying his essay.   Here's the story:

March 1979 - Egon Bondy is the import Pick Hit in this month's CG.  Although the album cover is shown, no formal review or grade is given.  The LP is discussed in ACN.

4/24/89 - Pulnoc performs at P.S. 122 in NYC.  Pulnoc is a new band formed 1988 consisting of the core of the original PPU - Jiri Kabes (guitar, viola), Josef Janicek (keyboards, guitar - no relation) and leader Milan Hlavsa (bass) along with new younger musicians Michaela Nemcova (singer), Karel Jancek (guitar), Petr Kumandzas (drums) and Tomas Schilla (cello).  This historic concert is the first time the Plastics played a concert anywhere outside their native Czechoslovakia.  Xgau attends and gets a copy of the soundboard tape from band manager.

4/25/89 - Pulnoc play the same venue; this time accompanied by Mofungo guitarist Elliot Sharp on saxophone and Gary Lucas on guitar.

(Note: back in an earlier EW thread, I recount my efforts to get the cassette.  Long story short, Xgau sent it to me once Pulnoc had disbanded and it was OK with their ex-manager).

1990 - JY sees the Egon Bondy LP in a New Orleans record store and snatches up this long-searched-for treasure.   I'm blown away by the music, as well as the story of the band as recounted in the amazing booklet inside.

1990/1991 - JY trades concert tapes with Branislav H (Plastics fan) in CZ. ( I send him Hendrix shows, and he sends me rare PPU tapes).  My obsession with the band grows.

January 1992 - Xgau reviews Pulnoc's City of Hysteria as well as their Czech self-titled album (both A-).

Late 1992 - JY travels to CZ for the first time.  The country of my ancestors.  Prague is breathtaking, and the beer is sublime.  I come back with more rare PPU memorabilia, including the self-titled Pulnoc CD on Globus.

1995 - JY writes one of the first in-depth histories of the Plastics for his friend's e-zine.
(Search "Plastic People Perfect Sound Forever" for my essay).

July 1998 - Xgau asks Jason Gross to write article for Voice on Plastics' concert at Irving Plaza on 7/18/98.  Jason tells me and sets up a meeting with the band the night before.

7/17/98 - Jason and I treat the Plastics to dinner at Gandhi (Indian restaurant on 6th St), & interview them with help from their manager Olga.  The Plastics autograph my 1997 live CD along with the PPU LPs I brought along.  Meyla tells me he really enjoyed my article which was translated into Czech.

7/18/98 - I attend PPU concert at Irving Plaza.  I buy the Globus CD "Live in New York" which they're selling and open it up to see Xgau's liner notes.  Before the show, I meet Xgau for the first time, and tell him "they're selling the Pulnoc concert CD over there...and it features liner notes by you...in Czech!".

1999 - Richie Unterburger sends JY copy of his new book "Unknown Legends of Rock 'n Roll" with inscription "Joe, thanks for starting the trail that led to the Plastic People".
Seth T.

Back in the 80s when I started xeroxing Consumer Guides from past issues of the Village Voice, I began to compile a "bibliography" of all Xgau's writing to keep track of what I copied.  Later, when I sent this file to Tom Hull for posting on the RC website, I recall deleting some of the personal Plastics-related entries from July 1998, etc.  But checking my word file last night, my "diary" was still there, hence all the dates.  In addition, when I started researching the Plastics for the PSF article, I compiled a very extensive chronology of the band that I had in another file, even though I never updated it since 1996.  I really should clean it up and post it somewhere as it's a pretty extensive chronology of the entire history of the Plastics/Pulnoc from 1967 thru 2000.

Other key dates:
5/9/89 - Xgau piece in the Voice on the Pulnoc concert.  A couple of weeks after seeing the 4/24/89 show, Xgau wrote this superb review of the band and the concert, which was later reprinted in GUAW.  I'm not sure if the title of the essay as it appears in GUAW, "The Iron Curtain at Midnight", was the original title of the piece as it appeared in the Voice.

Dec 1991 - Milo Miles review of Pulnoc's City of Hysteria in the Voice.

Jan 2001 - Xgau's Hlavsa obit for RS which was touching and appropriate.

2010 - Magical Nights, a 2-CD/3-LP anthology of the Plastics' music, is released on Munster label.

July 2011 - JY delves into Magical Nights, compares the track listing with the entire ouevre of the band which he knows backwards and forwards. and concludes that - although a band of this stature deserves a 4-CD box set complete with a huge book (The Merry Ghetto plus a chronology plus credits, track listings, etc.) instead of the chintzy microscopic liners actually included - this 2-CD set actually does contain the majority of their essential studio tracks and several of the key live recordings from their illegal concerts.  Seriously - as a huge fan of this band who's heard practically everything possible on them, this is a superb compilation of their very best on 2 CDs.  And the remastered sound is fantastic.

Fall 2011 - Xgau hears the raves, checks out Magical Nights, digs it, grades it Aplus, and they all lived happily ever after.