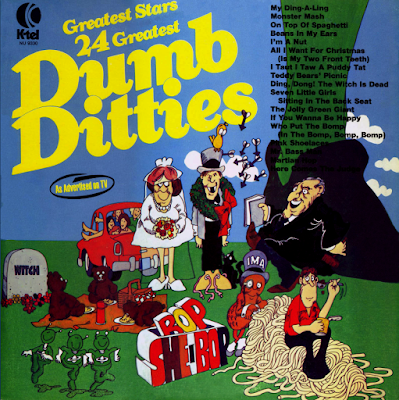 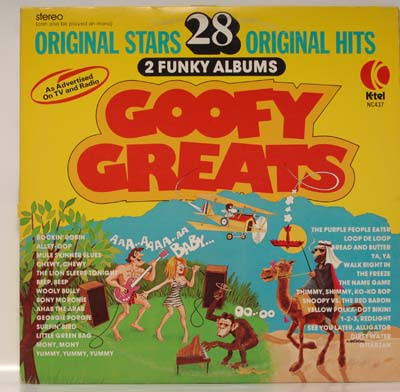 Below is an excerpt from an article by GREG BEETS that appeared in The Austin Chronicle on May 4, 2001, entitled "Explosive Dynamic Super Smash Hits!," in which I'm interviewed.


R.I.P., K-tel...we all miss you madly!
Until its stateside demise, K-tel was best known for jam-packed compilations of both past and present hits direct-marketed to consumers via garish, cheaply produced TV ads. Although K-tel's buffet-style MO seems quintessentially American, the company was actually founded in Winnipeg, Ontario, by Phillip Kives in 1962 before moving to Minneapolis in the early Seventies.

Having cut its teeth selling items like non-stick pans on TV, K-tel released its first album, 25 Polka Greats, in 1971.

K-tel wasn't the first label to specialize in compilations. California disc jockey Art Laboe pioneered the practice of licensing material from several labels with his Oldies but Goodies series in the Sixties. Ron Popeil's Ronco (immortalized in "Weird Al" Yankovic's "Mr. Popeil") sold plenty of compilations alongside useful products like Mr. Microphone and the Record Vacuum. However, it was K-tel that truly cultivated the form into a pop culture institution ripe for parody.

During the Seventies, K-tel's marketing ploys had the same seedy appeal as a carnival barker's come-on. The pitch was fast and furious, with deftly spliced snippets of music, song titles rapidly scrolling across the screen, and an overcaffeinated announcer imploring you to order now. Some aficionados swear the ads said K-tel albums were not available in stores, even though they were -- at unhip outlets such as drug and discount stores.

You won't find a much better snapshot of pop music in the early Seventies than 1972's Believe in Music. Named for Gallery's "I Believe in Music," the album kicks off with the 1-2-3 feel-good punch of "Brandy (You're a Fine Girl)" by Looking Glass, "Beautiful Sunday" by Daniel Boone, and "Sunny Days" by Lighthouse. Throw in Donny Osmond, the O'Jays, and a few more weird obscurities like Mouth & MacNeil's "How Do You Do?" and Bulldog's "No," and you have a bass-ackwardly definitive compilation rivaled only by Nuggets.

Maybe K-tel butchered art for profit. But even if that were true, does it make K-tel any worse than a record company padding a marginal artist's album with filler? Though it came at the expense of artistic vision, K-tel's Seventies output was nothing if not value-driven. Where else could you get up to 25 hit songs for the low, low price of $5.98 ($7.98 for 8-track)?

That said, the sonic quality of vintage K-tel albums is truly awful. You'll find better low end on a distant AM radio station, and the flimsier-than-Dynaflex vinyl ensures quick scratches if you so much as breathe too hard on it. And no discussion of K-tel would be complete without mentioning the blinding colors and screaming fonts utilized in the subtle-as-a-meat-cleaver cover art. But, as the tired old saying goes, that's part of the charm.

"Respectable" artists such as the Beatles and the Rolling Stones never showed up on K-tel. Although Eric Clapton and the Who made appearances, Elton John was the only megastar who appeared on K-tel albums with regularity. As a result, many K-tel albums portray an alternate musical universe that seldom crosses over into the mainstream pantheon advanced by today's classic rock and oldies stations.

Robert Hull is an executive producer at Time-Life Music, a label that produces compilations of popular music direct-marketed through TV. Hull is also a founding member of cult avant-garage band the Memphis Goons (as Xavier Tarpit) and a veteran of the Lester Bangs era at Creem (as Robot Hull). For Hull, the emergence of rock as a "serious" art form systematically eliminated a wide swath of music from the discourse of so-called tastemakers.

"In the late Sixties and early Seventies, Rolling Stone created the notion of the counter-culture," Hull says. "When I was working with Lester Bangs at Creem, we countered this with the idea of the counter-counterculture."

"In our pantheon were the garage groups, one-hit wonders, soft pop bands, bubblegum cretins, etc., that the 'serious' writers for the RS-type rags were dismissing because they didn't follow the 'auteur' concept of the singer-songwriter model."

"So, in essence, this type of music fell out of favor because of so-called rock journalism:  Rock began taking itself too seriously, even though there wasn't any real difference, in terms of motivation, between, say, Moby Grape and the Archies."