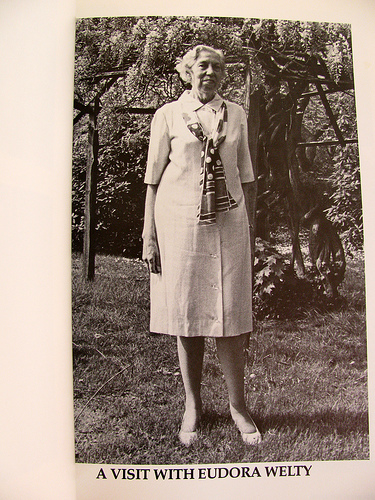 In the 1980s in a forgotten but wonderful magazine called Southern, there was once a cartoon series entitled "Little Known Chapters in Southern History."

Here's the caption for one of them: Citing "audience confusion,'" a promoter cancels the remaining dates of the 1962 James Brown/Flannery O'Connor Tour after the first show in Florence, South Carolina.

Adding to that confusion, there's an accompanying drawing: O'Connor reading stiffly while The Godfather of Soul kneels at her feet, shouting declarations of devotion and sending out wild and passionate demonstrations of his deepest needs.

No such undignified nonsense, no such cartoon, ever entered the minds of any Southern cartoonist regarding the South's #2 genius writer (Mr. Faulkner being #1, of course), Miss Eudora Welty.


I once saw Eudora Welty read at the University of Virginia. Following the razzle-dazzle tedium of writers Ann Beattie and Rita Mae Brown, Welty walked to the podium as if through molasses, bent and sad and with a humility that suggested an enduring spirit well beyond the academic comedy surrounding her.

Welty entered the academic setting as if from another era, blinked at the audience, and began to read from one of the funniest stories--not just of the 20th-century South--but perhaps ever written:  Why I Live at the P.O.," the bizarre tale of Papa-Daddy, Stella-Ronda, and Uncle Rondo in his flesh-colored kimono.

I cannot remember ever having laughed so hard.

As Miss Welty's voice slowly rolled the syllables she'd read so many times before, I could not help but think of her Mississippi landscape--of Robert Johnson, of Jimmie Rodgers, of Elvis Presley. Her dignity summoned forth another South, gentler and more restrained, before Elvis met Sam Phillips and the rebel yell was let loose via Lynyrd Skynyrd.

As Miss Welty's reading put Mississippi on my mind, I thought, too, of her words from "Place in Fiction":  "It seems plain that the art that speaks most clearly, explicitly, directly and passionately from its place of origin will remain the longest understood."
Posted by Robert Hull at 11:12 AM