TAKE A WALK ON THE WILD SIDE 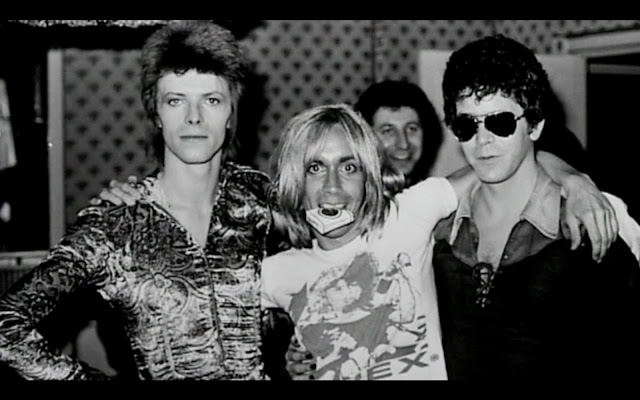 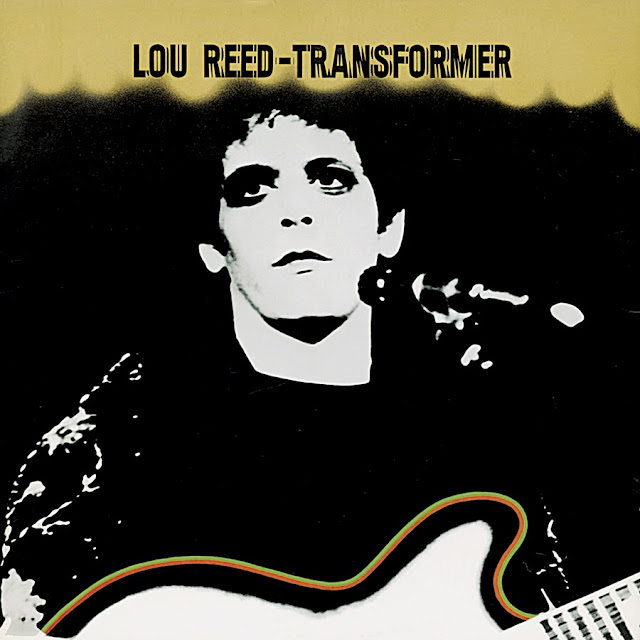 An assessment of Lou Reed's Transformer album as published in Creem (February 1973).

Their faces drooping in disbelief, the fans shook their baffled, bewildered heads. "If we hadn't seen him with our own eyes we never would have believe it."

They were commenting on Lou Reed's Transformation from a wrestling hero to a savage villain. -- from Teenage Wasteland Gazette #2

*
All Last year Lou Reed underwent variously assorted transformations. At one time he was a pirate, and another time he became a transvestite, and even a Lou Reed pamphlet was printed and distributed, claiming that Lou actually had a double who was really responsible for his first album.

This year, on the other hand, Lou Reed must carry the role of a social deviant who hides in closets and jerks off at the mere mention of Marilyn Monroe. Essentially, it's back to those blissful days of Warhol legends when living was clean, and everybody could be zombies with black circles around their eyes.

That's showbiz, and Lou Reed always did wanna appear in a Broadway musical.

This new album is further proof even that Lou Reed has turned into something sicker than a homicidal-rapist-mass murderer-porno editor. Far gone is that prevailing commercial bubblegum flair so evident on the first album (e.g. "I Love You," "'Lisa Says," "Love Makes You Feel"). Instead, it's more like what the third Velvet Underground album would have sounded like if David Bowie had been in charge of production back then.

There's a couple of cute ditties on here that perhaps belong on We're Only In It For The Money (dumbshit show tunes in which Bowie gets to fill in all the vacant gaps with chugging trombones and tubas), but other than that this album proclaims itself as most masterpieces proclaim themselves: IT GROWS ON YA!

Primarily this is because of the lyrics. There are so many good lines thrown at ya at once that, in fact, you could even make a scrapbook. Prime examples are for instance like on "Vicious" a chunky rocker which wraps its belt around ya with the lines – "When I see you walking down he street, I step on you walking down the street, I step on your hands and mangle your feet" or "Hey, why don't you swallow razor blades?!" which fades into the gritty chorus:

Vicious
You hit me with a flower
You do it every hour
Oh, baby, you're so vicious.

Then there's "Wagon Wheel," which is even more frantic than "Vicious" except that it features a prayer by Lou wherein he confesses all of his sins. Yeah, it's got good lines, too, like – "but if'n you think that you get kicks from flirting with danger/then kick her in the head and re-arrange her". This all fizzles into an over-bold attempt at "Wake Me, Shake Me."

Other noteworthy efforts include "Satellite of Love," total Bowie and would make a terrific Xmas AM hit single; "Make Up," a careful study of all the gunk that attractive "slick little girls" smear on their faces; "I'm So Free," a punk psychedelic rouser reminiscent of the Electric Prunes and a definite Midwest regional hit; and "Andy's Chest," which mostly takes about how your bellybutton is really your mouth and if your feet stink it's really your nose.

But none of em, absolutely none of em, can top "Walk on the Wild Side," which is most certainly the best thing Lou Reed has come out with since "Rock & Roll." The song is one of those impromptu "Wild Child" ramble-epics which feature exclusively Lou's magnificent sense of sneeze-phrasing. Strings are attached onto this one, and it makes you feel like tiny ants are gnawing on your big toe.

At the final clip of the saga, Bowie crams a mellow sax up your rectum, and Lou has his colored (that's what he calls em) backup female chorus do some percolator imitations. But it's words that curdle your oily lubricants and none are better than this verse:

Candy came from out on the island
In the backroom she was everybody's darling
But she never lost her head
Even when she was giving head.
She sez – hey, babe, take a walk on the wild side.

Well, of course, there are songs you're gonna wanna skip, but the cover should make up for that. Lou Reed looks like he just stepped out of the horror flick about zombies or even more like he's been giving rim jobs to the Fugs during the performance on Golden Filth. Yup, he's a full-fledged social degenerate now, and I really don't see how he could get any lower. Not even Candid Press would have the guts to touch him these days. 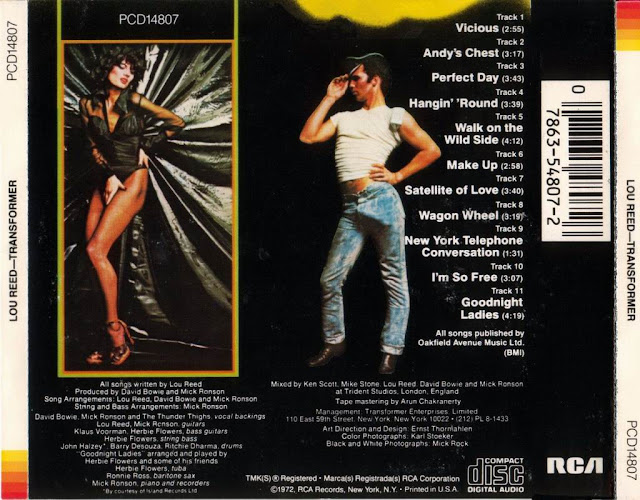